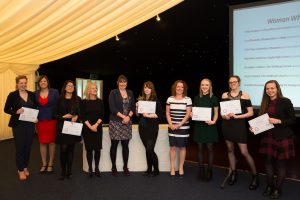 Congratulations to Lucy Reynolds of Warwickshire College, one of our two Winners of the Coventry & Warwickshire Woman Who…Rising Star Award 2016.

The Judges selected Lucy as one of the Rising Star Winners as she is in a traditionally male dominated world and following an alternative route of education.  We wish her well.

I was pleasantly surprised when I was nominated for this award by my lecturer; Emily Keal. It means a lot to me and has improved my self-belief and confidence. I enjoyed the awards ceremony as it was a new and unique experience for me and the various speeches from the presentations have inspired me to push myself further and achieve bigger and better things.

Thank you for the award.

Lucy is described a shy and intelligent focused and driven young lady who over the last 18 months has been the only female in a class of 10 “typical blokes”.  She has really come out of her shell and is the highest achieving student on the course, on target for a Distinction for her Foundation Degree and a 1st Class Honors Degree next year. She deserves recognition for how far she has come in such a short time within a male dominated environment with great potential.

Form College, taking A levels in Maths, Physics, Business & Geography.  Out of school, Brooklyn spends much of her spare time with the Air Cadets where she displays strong Leadership Skills and Team Work which was recognised when she was promoted to Corporal. In addition, Brooklyn has recently been invited for interview in Birmingham for the Welbeck Defence 6th Form College.