Ian O’Donnell was recently awarded his MBE at Buckingham Palace. He now joins our Judging Panel for the Woman Who…Awards. 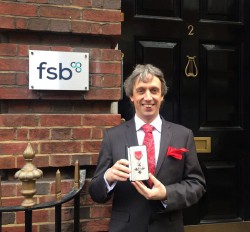 Ian is completely dedicated to giving back to his local community both through his personal and professional activities. He started his business in 1994 and now employs 7 people at his office in Hampton-in-Arden, and alongside his commitment to his family and business, Ian is also Chairman of the local Federation of Small Businesses, Chairman of Birmingham Business Club, on the board of the Solihull Safer Partnerships, an active member and trustee of the local church where he leads a weekly youth group and also finds time to be a member of Massey Ferguson running club and Parkrun!

During his time with the FSB, Ian has been invited on a number of occasions to the Houses of Parliament and 10 Downing Street to represent small business in the region, which included a meeting with all Coventry, Warwickshire & Solihull MPs and the transport Minister Norman Baker to raise issues of transport in the region. He also was invited to meet the newly appointed Small Business Ambassadors.

Ian is passionate about skills and engaging with the education sector to ensure that future generations are equipped with basic skills to achieve in business, whether as an employee or a business owner. He has spoken at many Young Enterprise finals as entrepreneurial speaker and is often speaking on the issue of skills at a local and national level. Within his own business he has given opportunities to apprentices and graduates.

Ian has also been an advocate in the region in lobbying for increased broadband and mobile speeds in rural areas. Through his roles within the FSB he has responded to a number of consultations on rural broadband, provided evidence to support the CSW Broadband project and attended meetings with Coventry City Council reference Super connected Cities and involved in the development of the West Midlands Combined Authority and the broader Midlands Engine.